Krakow Smog Alert carried out research on the quality of the coal available in fuel depots in the Malopolska and Silesian Regions. The actual quality of coal has been compared, among other things, with the one declared by sellers.

Samples of the tested coal came from depots in the Malopolska and Silesian Regions. They were collected in an amount of 10 to 25 kilograms directly from coal piles or in plastic bags after being pre-packed by sellers. The types of samples corresponded to the assortment used in Polish households. They included the so-called eco-pea coal, nut coal and coal dust. The analysis of the samples was carried out by an accredited laboratory of the Institute for Chemical Processing of Coal in Zabrze. Sulfur and ash content, the humidity and calorific value of coal were tested among other things.

The first conclusion that arises from the research is that coal sellers very rarely inform about the parameters of the coal being sold. Only in one case did the seller present a document confirming the quality of the coal sold. In the case of eco-pea, some parameters were determined on the bags. In other cases, sellers only reported the calorific value and / or name of the mine, referring for more information to the manufacturer’s website. Therefore, retail coal buyers do not have the basic information concerning the quality of the product they buy, and the few parameters given by the sellers are declarative, not confirmed by appropriate documentation nor verified by appropriate inspection services.

The parameter given by almost all sellers is the calorific value of coal, i.e. the energy contained in a given coal product. It turns out, however, that in 8 cases out of 14 the calorific value was actually lower than the one given by the producers, so de facto it could be concluded that the buyers paid more than they should. The worst case of the sampled concerned one of the fine coals – the difference was as high as 20 percent (5 MJ/kg).

In general, the differences were not so large – they oscillated around 10 percent. Attention should also be paid to the fact that the calorific value was in line with or higher than the declared by producers in 7 out of 15 cases. However, customers do not have any tools to differentiate between manufacturers and sellers presenting the actual parameters of the products being sold from those who give overpriced parameters. The introduction of regulations that will eliminate this type of behavior is necessarily due to the concern for the customer’s interest. 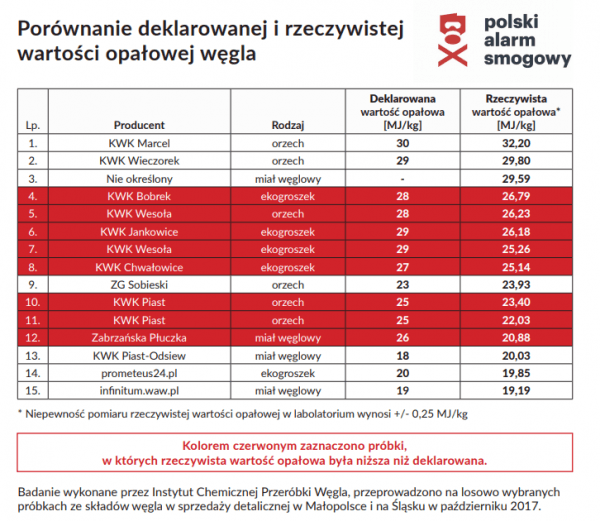 Meanwhile, the results of the analysis of the samples show that there is no shortage of good quality fuel on the market. Many samples were characterized by good parameters of ash and sulfur content, which would easily allow them to meet even demanding quality standards. Only 4 out of the 15 samples tested had a sulfur content greater than 0.7%. Four samples were characterized by ash content greater than 10%, two of which were slightly greater. Four samples were also characterized by moisture content greater than 12%. In total, the three criteria were met by more than half of the samples. This shows that, in addition to the coal of poor quality, there is quite a lot of decent quality coal on the retail coal market in Poland. Unfortunately, common customers buying coal are not capable of verifying which type of coal they buy. The coal that does not meet the above parameters should be withdrawn from the household market due to its negative impact on air quality.

Reliable information on the quality of coal is all the more important because modern boilers require high quality fuels to achieve their nominal emission parameters, they should be characterized by a high heating value, low content of moisture, ash and sulfur. We need to know what is being fed into our device to be able to use the capabilities of such a device. 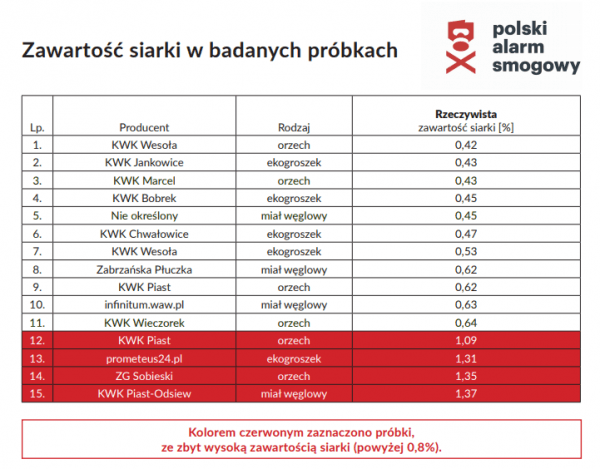 However, apart from good quality fuel, there are many types of fuel that do not meet any criteria. This type of coal should not be available due to the very negative impact on the air. What is more, the cost-effectiveness of heating using this type of coal is also questionable. For example, one of the coal samples contained as much as 30 percent moisture. Another, over 20 percent. This means that buying 1 ton of coal of such poor quality, we pay for 300 kg of water that at the same time exacerbates the calorific value of coal. Information on the moisture content is occasionally given by retailers or manufacturers.

It was also found that none of the analyzed fine coals met the criteria of the smog resolutions of the Malopolska and Silesian Regions – they were purchased in the regions and should not be used for heating in domestic furnaces. 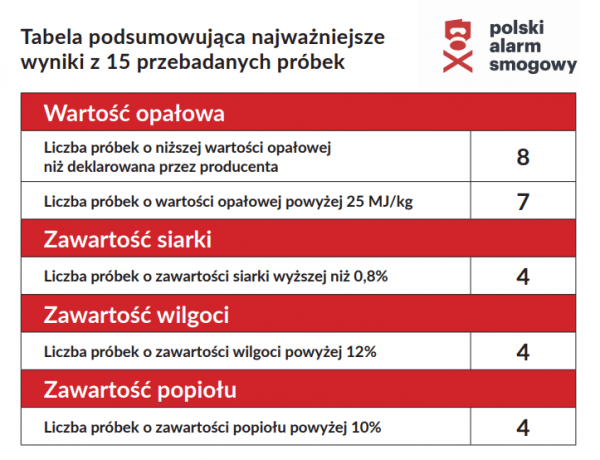 Analyzes were carried out as part of Measure C.2 “Competence Center” of the “Implementation of the Air Quality Program for the Malopolska Region – Malopolska in a Healthy Atmosphere” LIFE14 IPE PL 021 / LIFE IP MALOPOLSKA co-financed by the European Union LIFE Program.

Ecomanagers in Małopolska improve their qualifications!

New energy in municipalities and counties!