We are presenting a summary of the results of a survey conducted on a representative group of 1000 residents of the Malopolska Region and concerning their knowledge of issues related to the poor air quality. The research was carried out using the CATI telephone interview technique conducted by trained interviewers from the CATI laboratory located at the headquarters of the CEM Institute in Krakow.

In 2016, as part of the LIFE project, the first public opinion polls on the perception of the problem of the air quality by the inhabitants of the Malopolska Region were carried out. Since then, significant progress has been made with respect to actions aimed at reducing air pollution. In addition to the unfaltering and even increasing presence of the subject of air pollution in public media, the most important include the 2017 adoption by the Sejmik of the Malopolska Region of the so-called anti-smog resolution, covering the area of the whole region with its provisions. The aim of the research carried out in 2018 was, inter alia, to assess the scale of changes that have taken place since 2016 in the social perception of the air pollution and the answer to the question whether the activities of local authorities, media and NGOs translate into the growing awareness of the analyzed area.

Awareness of the problem

In the past two years, the awareness of the problem of smog in smaller towns of the Malopolska Region has increased from 36 to 60%. Almost all Krakow residents and more and more villagers also notice it. Almost all support strong anti-smog activities undertaken by local authorities. Over half of the Malopolska Region residents say that the air quality in their towns is poor or very poor. The number is over 10% greater than it was two years ago. The highest awareness is recorded in Krakow, where almost 90%, when asked, see the problem. In other cities of the region, the percentage of people dissatisfied with the air quality is at the level of 60%.

Among the Krakow residents, as many as 90% of respondents are convinced that they live in the most polluted region in Poland . The awareness of the problem has increased the most in smaller cities (from 36 to 60 %) and in the villages, where it is still very low (from 16 to 29 %). 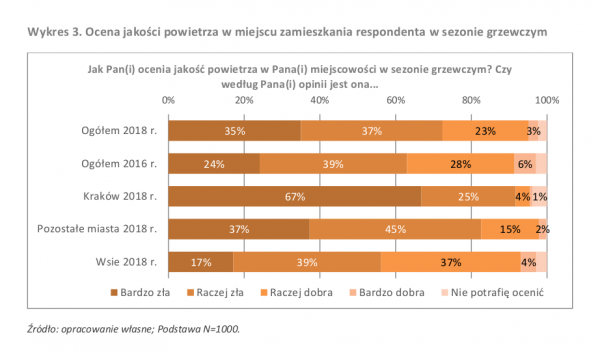 44% of respondents in the Malopolska Region admit that air pollution is a very serious personal problem for them or their families. 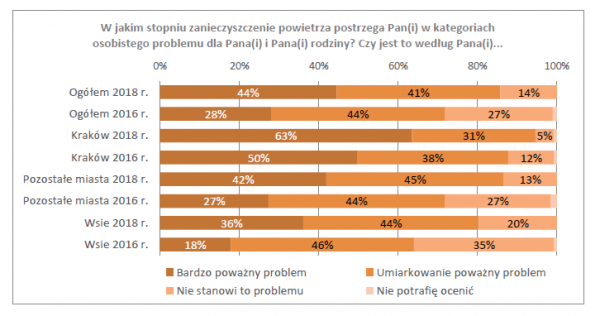 70% of the respondents declare that they have heard about the anti-smog’s Malopolska resolution, but only every fifth knows what it includes. 88% declared that they supported it, having learned its content. 90% supports clean air activities, such as the obligation to replace old coal furnaces and stoves (with subsidies granted), a ban on the sale of the worst coal quality with a high content of pollutants and an increase in fines for using waste for heating. 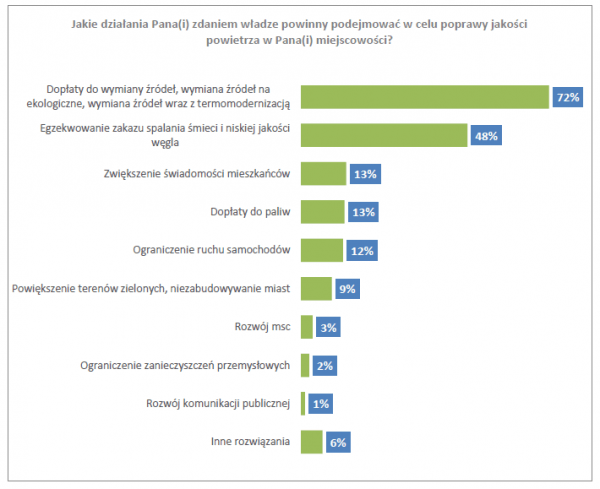 72% of all respondents indicated the using coal and wood for heating in domestic furnaces and stoves as the main cause of air pollution (58% in 2016). 81% of Krakow residents support the ban on the entry of old cars with diesel engines to city centers. And 47% declare support for the introduction of charges for car travel.

The need for hiring Eco-managers

As many as 85% of respondents perceive the need for the help provided by Eco-managers, advice in the selection of ecological house heating, obtaining subsidies for exchanging furnaces and conducting educational campaigns. 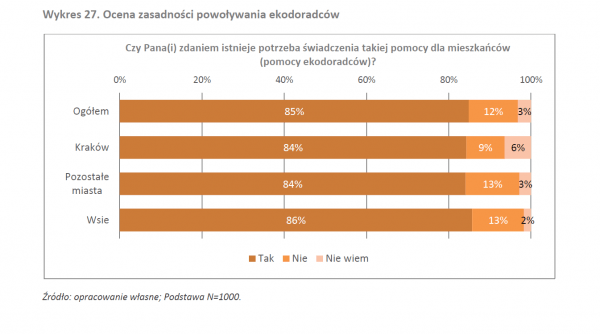 The research carried out by the CEM Institute for Market and Public Opinion Research, commissioned by the Krakow Smog Alert Association, as part of the implementation of the “Implementation of the air quality plan for the Malopolska Region – Malopolska in a healthy atmosphere” project co-financed under the European Union (LIFE-IP MALOPOLSKA/LIFE14 IPE PL021).

Ecomanagers in Małopolska improve their qualifications!

New energy in municipalities and counties!