We have summarized the effects of the actions in Małopolska Region in the fight against smog in 2017. The prepared document contains information on the effects of local government activities. The entities showed activities that directly or indirectly affected the improvement of air quality in Małopolska, presented, among others, achieved environmental effects and expenses incurred.

Liquidation of coal furnaces and boilers

On 1 July 2017, an anti-smog resolution for the Małopolska region, adopted by the Assembly of the Małopolska Region, entered into force. It prohibited the use of new boilers and fireplaces that do not meet the ecodesign requirements, the use of coal sludge and flotoconcentrates, and biomass with a moisture content above 20%. At the same time, a transitional anti-smog resolution for Krakow came into force, which introduced a ban on the burning of poor quality coal and moist biomass.

Map: Number of coal furnaces and boilers liquidated in 2017 in the Małopolska municipalities.

A total of over  28 km of new heating networks were build, to which nearly 600 new heat consumers were connected and nearly 220 km of new gas networks with a connection of almost 30,000 new gas recipients. Also in 771 buildings thermal renovation was completed and 1,446 new renewable energy sources were installed.

Activities in the area of ​​low emission reduction undertaken by municipalities and poviats allowed in 2017 to reduce the emission of PM10 by 280.9 Mg and PM2,5 by 246.2 Mg. The emission of benzo(a)pyrene has been reduced by 144 kg.

83 municipalities have taken measures to control the incineration of waste by residents. In 2017, a total of 16,200 inspections were carried out in which 1,200 non-compliance (7.2% of all controls) were detected. The fines were imposed in the total amount of 79,000 PLN and 44 cases were referred to the court.

In 73 communes, inspections were carried out to comply with the requirements of the anti-smog resolution. In total, nearly 11,000 controls were conducted resulting in over 300 cases of non-compliance with the resolution. In the majority of municipalities, controls in the scope of compliance with anti-smog resolutions were carried out together with controls on the incineration of waste or plant residues.

Map: Number of waste incineration inspections carried out in 2017 in the Małopolska municipalities.

In the municipalities and poviats of the Małopolska Region, a total of 1,100 actions or educational campaigns in the field of air protection were organized, in which 400,000 participants took part.

83 municipalities have prepared and updated a database of contacts to schools and health centers in order to provide notifications from poviat crisis management centers about the occurrence of high levels of pollution. 121 municipalities and 14 poviats declared that they publish on the website announcements about high air pollution.

Reduction of emissions from transport

Municipalities in Małopolska also undertook activities in the field of reducing transport emissions. The most important of them are:

Costs of activities in the field of air protection

Change in the level of pollutants in the air

Air quality in Małopolska in 2017 did not change significantly compared to the previous year. The average annual concentrations of PM10 and PM2.5 were comparable to last year’s values. According to the air quality assessment performed by the Provincial Inspectorate for Environmental Protection in Kraków, exceeding the admissible value of PM10 and the target level of benzo(a)pyrene occurred in all zones of the Małopolska Region. 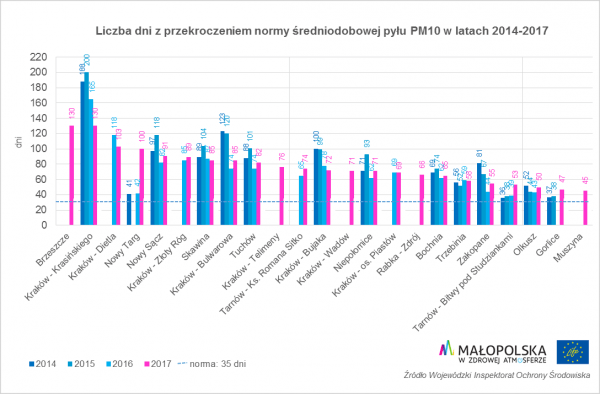 The number of days exceeding the daily level of PM10 in 2017. 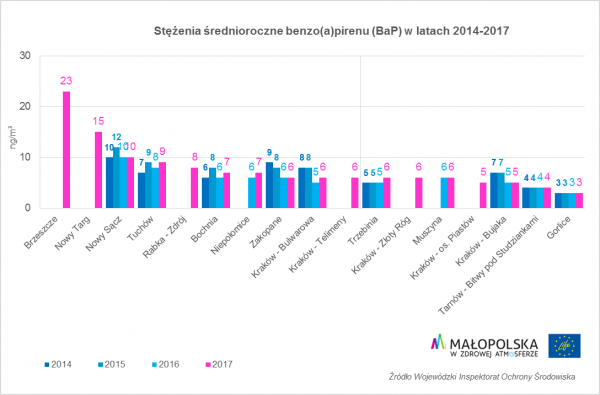 Average annual concentrations of benzo(a)pyrene in 2017.

Measurements have shown that the worst air quality in Małopolska occurred at measuring stations in:

Check also the effects of the implementation of the Air Quality Plan for the Małopolska Region in previous years:

☁ » News » Summary of anti-smog activities in Małopolska in 2017

This site uses cookies to provide services at the highest level. Further use of the site means that you agree to their use.I agreePrivacy policy