Air quality measurements have been carried out in Wadowice Since January 27, 2017 thanks to the Krakow Smog Alert Station installed on the John Paul II Square. The measurement results show that in January and February 2018 the air quality in Wadowice was worse than in Krakow.

In order to build social awareness of the problem, it is necessary to have access to information on air quality in a given town. The results of quantitative research carried out in the Malopolska Region indicate that this awareness is much lower in smaller towns and villages than in the capital of the Region. Inhabitants of smaller towns very often do not have access to measuring equipment, hence they do not know the quality of air in their place of residence, and the problem of air pollution is associated only with Krakow.

Developing residents’ awareness requires conducting measurements in various regions. Therefore, the Krakow Smog Alert has been verifying air quality for a few years where there is no state monitoring station located. Wadowice is one of such places. A measuring station was installed there on January 23, 2017. Analysis of the results obtained until February 28, 2018 showed that the quality of Wadowice air is not the best. Comparing the results obtained with Krakow, it can be assumed that the air quality in Wadowice is very bad.

Exceedances of particulate matter PM10 standards in the air have been repeatedly recorded in the period from 24/01/2017 to 23/01/2018. Daily standards were exceeded on over 100 days. The analysis showed a clear correlation between low temperatures and deterioration of the air quality. Certainly, it can be concluded that low emission from home heating devices is the main cause of poor air quality in Wadowice.

The concentrations of benzo (a) pyrene are also very negative. 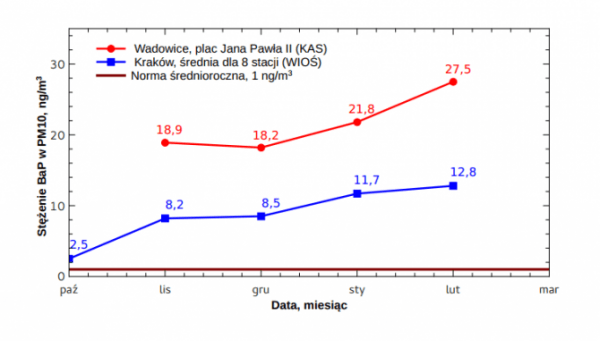 The research was carried out under measure C.2 “Competence Center” of the integrated project “Implementation of the Air Quality Program for the Malopolska Region – Malopolska in a healthy atmosphere” LIFE14 IPE PL 021/LIFE IP MAŁOPOLSKA.”

Green Malopolska – picnics and workshops across the region

Today is the world bicycle holiday. In the LIFE Project we celebrate…